CAN THE RISE OF ISLAMIZATION STILL BE HALTED? Two Appendices from the true crime Dead End Street 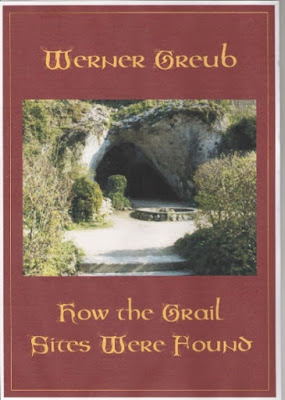 Note: These two appendices I. and II. are taken from Dead End Street - Why the Dutch Secret Service Murdered Their Top Secret Service Agent Theo van Gogh by Slobodan Radojev Mitric that was presented by the publisher Robert J. Kelder on November 2, 2016 at the public commemoration of the murder of Theo van Gogh in Amsterdam.

I.
An answer of sorts to the above question posed by Dusan Tesic Lužanski in his foreword to this book [Dead End Street] can, strange or even unbelievable as it may seem,  be found in the book How the Grail SitesWere Found – Wolfram von Eschenbach and the Reality of the Grail by the Swiss researcher Werner Greub (1907-1997).

This erudite interdisciplinary research report is the first volume of a trilogy on the history of the Grail from Zarathustra, founder of the ancient Persian civilisation more than 6.000 years ago, to Rudolf Steiner (1861-1925), founder of what he called “a science of the Grail, or anthroposophy”. Based on Wolfram von Eschenbach’s Grail romance Parzival and his epos Willehalm it reveals a new, ground-breaking biography of this 9th century founder of the House of Orange in the South of France. For as a paladin of Charlemagne and the supreme commander the Carolingian army in the southern flank of the empire, this William of Orange halted the invasion of the marauding Moors from Spain, thereby setting the stage for the inauguration of Parzival as king of the Grail on free Christian soil, an event in which he himself played the role of spiritus rector. This was a historic event of great spiritual significance for the whole of mankind on earth and can be viewed as a repetition of the constellation in the heavens described in the Gospel of Matthew as the Star of Bethlehem heralding through the Three Kings or Magi from the East the birth of the Jesus child as portrayed in the Gospel of Matthew.
But Willehalm of Orange as a knight of the sword and one of the last defenders of Celtic or Grail Christianity not only halted the Islamic advance into Europe through his exemplary embodiment of the knightly virtues of courage, justice and loyalty, for which he was canonised by Pope Alexander II in 1066 as patron saint of the knights. For, while captive in Spain he managed to convert a Muslim princess Arabel, who later became his second wife Giburc, to an advanced form of Celtic or Grail Christianity that was able to forge a direct link to the ancient mysteries of the East that he had absorbed as a favorite student of the great spiritual teacher Alcuin of York, who was engaged by Charlemagne to educate the ruling classes of his vast empire.  It was this cosmic form of Johannean Christianity, which had led the Three Kings to travel to Palestine to herald the prophesied birth of the Jesus child, with which Arabel as a postgraduate of the palace school of Harun al Raschid in Bagdad could identify and connect, realizing that it was not at all a question of giving up or subduing her own religion, but rather of embracing this advanced form of esoteric Christianity as its necessary supplement.  This spiritual union, as it were, between East and West, forged this time by Willehalm as a knight of the Word is the real underlying motive for their marriage, which of course did not remain without grave consequences for it triggered two great battles near Arles in the South of France between the armies of Arabel’s next of kin and the forces of Willehalm and his family, events which still have not been recorded in history.

These few glimpse into this aspect of Werner Greub’s Grail research may give an indication as to how an answer can be found to what Dusan Tesic Lužanski has called “the third wave of Islamization in Europe.” For it should by now be evident that, in so far as Islamization is a religious phenomenon, that answers beyond this field, be they of a political or military nature, will not suffice. An answer can only come here from a concerted effort of modern knights of the word, inspired by this newfound biography of this model knight of the Sword, who gave up the sword in order to become a knight of the Word in the service of a New Christianity or science of the Grail as championed by anthroposophist Rudolf Steiner and his true advocates, loyal students and benign followers, wherever they are and whoever they may be.  How and by whom this could be done will be indicated briefly in the next appendix.

How the Grail Sites Were Found, ISBN 978-90-73932-27-2, A-4 format, 420 p. can be ordered from your local bookstore or by contacting  the Willehalm Institute Press Foundation at info@willehalm.nl. 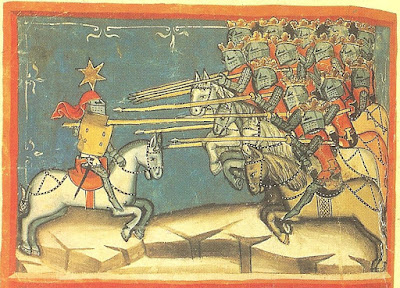 The first book edition of How the Grail Sites Were Found was presented on May 3, 2013, by the publisher as part of the festivities connected with an international book and art exhibition in Amsterdam City Hall organized by the Willehalm Foundation entitled The Virtues—Towards a New Courtesy.

The book is dedicated to the new Dutch King William-Alexander of Orange and the Dutch Council of High Nobility as part of a petition that was formally submitted on May 28, 2014, to the said king, who according to the constitution is the only one entitled to institute a new order. Now still under consideration by the Dutch Chancellery of Dutch Orders, it entails a request to establish a Willehalm Order of Knights of the Word as a supplement to the Military Willemsorde, which is duly named after the medieval William of Orange (see his image carrying the Star of Bethlehem on his helm in battle with 15 Moorish kings) and of which his current namesake is the Grand Master. (Update: The notion that King William- Alexander has the power to institute such a new Order turned out to be mistaken, this is the sole prerogative of the government. The petition was rejected by the Chancellery on November 25 2016 on the grounds that it saw no necessity for instituting such an order. Nevertheless on March 19, 2017 a revised English version was put on the internet.)
The proposed mission of this new chivalric order of the Word named after the patron saint of the knights has in the meantime been enlarged from helping to develop a new world economic order to furthering and protecting the New Christianity, both of which were introduced by Rudolf Steiner during the first quarter of the 20th century as the economic and spiritual basis for his anthroposophy.

As guidelines for this project, the Willehalm Institute Press Foundation in Amsterdam has published a series of seminal books. The English titles thereof are : The Virtues – Seasons of the Soul, The Just Price – World Economy as Social Organics, and Charter of Humanity - The Principles of the General Anthroposophical Society by the philosopher/ anthroposophist and industrialist Herbert Witzenmann (1905-1988). Forthcoming in this line is a translation into Dutch of Christ and Sophia – Anthroposophical Meditations on the Old Testament, the New Testament and the Apocalypse by Valentin Tomberg (1900-1973) and The Jesus Mysteries – Rudolf Steiner’s Chronology of the Gospels and the Christ Prophecy of Zarathustra from the third volume of Werner Greub’s Grail trilogy.

This knightly endeavor is in line with the seven statutory objectives of the Willehalm Foundation, three of which are:

1.  To perform and publish research concerning the life and work of Willehalm as, on the one hand, the supreme commander of the Carolingian army in the Spanish Mark in the 9th century and, on the other hand, after his retirement from active duty, as the spiritus rector of the Grail events, so as to be able to properly evaluate his hitherto underrated role in the history of the Christian Occident with respect to matters of defence and security as well as spirituality and religion;
2.  To perform research in order to demonstrate how the Willehalm impulse emerged at the beginning of the 20th century in Central Europe in a new form in the anthroposophy founded by Rudolf Steiner (1861-1925), also called science of the Grail, with her social component, the idea of the threefold social organism: freedom in the cultural life, equality in the rights sphere and brotherhood in the economy. Also known as social organics, i.e. in the form of a science of world economy understood as the harmonious interaction between the production factors nature, work and capital to achieve fair, just prices by means of economic associations.
3.  To also translate, publish, present and further the works of non-anthroposophical writers and fighters for freedom and justice [such as Slobodan Mitric], who in the spirit of the Willehalm impulse are also striving to bring to the fore, on the one hand, the true, the good and the beautiful in mankind and human society and, on the other hand, to expose and withstand the false, the bad and the ugly for what it is, or in Manichaean sense to transform it.

The principles of the General Anthroposophical Society

Power to the Virtues